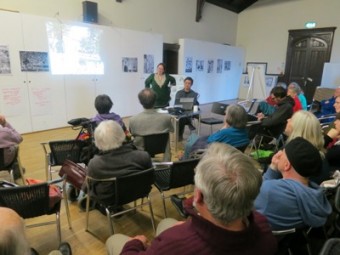 Emily speaking at the Edinburgh Peace and Justice Centre, April 2013

‘I write with some delay to say a big thank you on behalf of both of our groups for the wonderful ‘The world is my country’ evening the other day. There has been nothing but praise, from many quarters; your talk went seamlessly and naturally from being uplifting, disturbing , and entertaining in turn. Above all it was informative and interesting throughout.’

Emily and Gabriel toured the UK during 2015, talking about the posters and the First World War anti-war movement.

If you’d like to offer to host an event for the speaking tour and / or arrange an exhibition of the posters in your local area, then please contact us: 0207 278 3344 or promos [at] peacenews.info.

Please include: your name and contact details (email and phone number); which dates you have in mind; the name of the group; and the likely size of the audience. Hosts will be expected to provide our train fares from Hastings as well as accommodation (where necessary). We are also encouraging all groups to do local press work around the exhibition and talks, and will provide a template press release for this purpose.

‘[T]hank you for speaking at Senate House Library last week … the combination of Gabriel’s research and Emily’s work made for a fascinating evening. It was both thought-provoking and beautiful! We cannot thank you enough for your time and effort.’

‘I really enjoyed your event at Torriano this evening. Everything: 1,000 falafels, the many words, the few songs and poems, singing to the film, the fresh air break half-way through … It had the mood of a family celebration even if I was not a family member. May I congratulate you all!’

‘One of the most enjoyable evenings I’ve spent this year’ – workshop participant, June 2015

‘[A] fascinating evening, and such a very different take on war resisters …Very impressive and completely enthralling. It quite inspired me …’