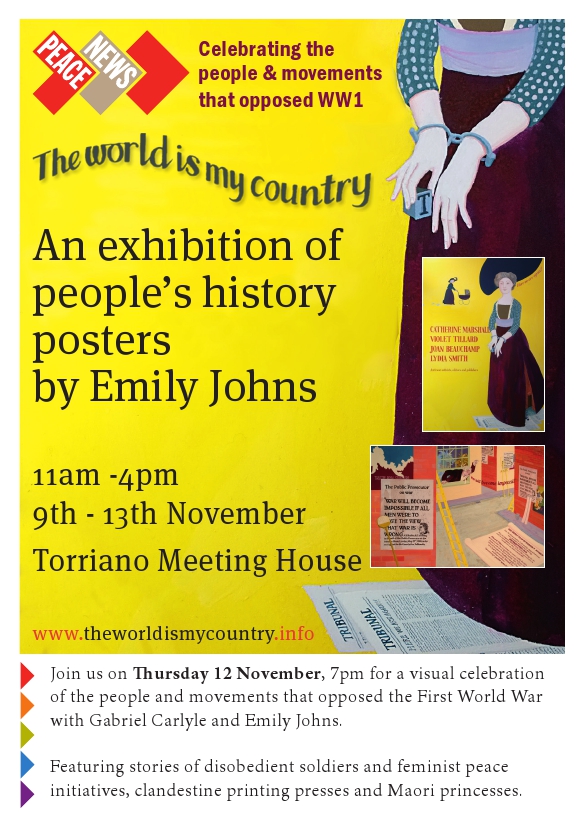 9 – 13 November, Kentish Town: Opponents of the First World War from around the world will be celebrated in a five-day art and poetry exhibition at the Torriano Meeting House (99 Torriano Avenue, NW5 2RX) [2] in Kentish Town next week. The event features the acclaimed art work of Camden-born artist Emily Johns [3], and will be accompanied by a free talk at the same venue at 7pm on Thursday 12 November.

The exhibition, which runs daily 11am – 4pm from Monday 9 November to Friday 13 November, consists of ten ‘people’s history’ art posters by Emily Johns [4], and eight poem / song posters by a variety of poets and songwriters including Anna Robinson [5], Alan Brownjohn [6], Dan Kennedy, Krysia Mansfield and the winner of the Welsh bardic Chair and Crown, Mererid Hopwood [7].

Stories featured in the posters include:

Emily Johns said: “The British government and military have been trying to use the First World War centenary to push the idea that military heroism whilst obeying orders is a uniquely noble form of self-sacrifice. It is therefore especially important to reclaim the histories of those, on all sides and none – and including both soldiers and conscientious objectors – who opposed the senseless carnage of the First World War and instead campaigned for peace.”