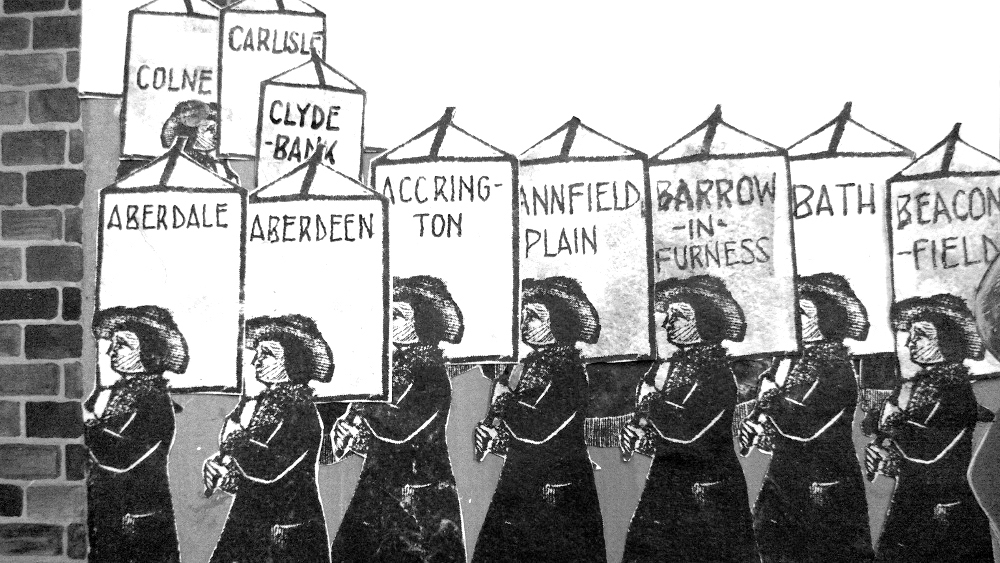 According to Jeremy Paxman, once the war had started ‘there was no way of stopping it, any more than you could suddenly make the dead start to walk again’. [1] In fact, a good argument can be made that there were real possibilities for a negotiated peace in the winter of 1917 / 18. [2] 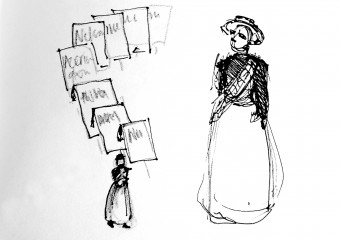 Indeed, a series of events througout 1917 and into early 1918 give credence to the notion that, given a different response on the part Western political leaders, ‘anything m[ight] have been possible’. [3]

By the autumn of 1917, several key members of the British cabinet had privately ‘made predictions that peace would have to be negotiated sooner or later’. [8]

However, Britain – which had already agreed to expand Allied war aims to include the dissolution of Turkish and Austro-Hungarian empires, underwritten French and Italian expansionism, and remained committed to the resolutions of the 1916 Paris Economic Conference, with its ‘resolutions to continue economic warfare against the Germans even after they were defeated’ – would prove to a key obstacle to such an outcome. [9]

In a November 1917 memorandum to the Secretary of State, Lord Lansdowne (a former Tory Foreign Secretary and a hawk at the war’s outbreak) noted his impression:

‘[T]hat the people of Germany and Austria would put irresistible pressure on their governments, and compel them to offer us decent terms, but for the success of those governments in convincing them that decent terms are unobtainable and that England is the sole obstacle in the way.’ [10]

Instead, on 4 February 1918, the Allies ‘declar[ed] that all prospect of negotiations had now ended and that force would be met with force’, derailing ‘a concerted effort on the part of [German] moderates … to press for a diplomatic offensive, based on an explicit renunciation of annexation in Belgium, before Ludendorff was given his chance to crash through’. [11]

‘In this way,’ historian Douglas Newton notes, ‘the Allied Right always came to the rescue of the German nationalist Right’. [12]

[2] Douglas Newton, ‘The Lansdowne ‘Peace Letter’ of 1917 and the Prospect of Peace by Negotiation with Germany’, Australian Journal of Politics and History, vol. 48, no. 1, 2002, pp 16 – 39. Among other things, such a peace would have saved the lives and limbs of the tens of thousands killed and wounded during the German offensives of March and April 1918. Over 10,800 German and over 7,500 British soldies were killed during a single day (21 March 1918) of Germany’s ‘Operation Michael’ offensive in March / April 1918 (David Stevenson, With Our Backs to the Wall: Victory and Defeat in 1918, Penguin, 2012, p.55). The total number of casualties (including prisoners and wounded) during Michael stood at over ½ million (Niall Ferguson, The Pity of War, Penguin, 1998, p. 294, this figure combines French, German and British figures).

[3] Newton, op. cit., p. 37. Newton notes that in any attempt to negotiate a general peace ‘in the public view, in Geneva, Washington or the Hague’, diplomats on all sides ‘would have been subject to a sudden and formidable mobilisation of long-suppressed public opinion’ and therefore ‘under tremendous pressure not to rise from the negotiating table without stirking a bargain’ (ibid., p. 38). It is therefore quite wrong, he argues ‘to claim that we know negotiations would have failed to avert the bloodshed of 1918, simply because the war aims of the belligerents were too far apart’ (ibid.).

[4] The proposal, for an international conference of socialists in Stockholm, originated with a Dutch-Scandinavian group of socialist parties and was then taken up by the Petrograd Soviet on 15 May 1917. For details of how Lloyd George manoeuvred ‘first to draw Stockholm’s poison before encouraging others to kill it’ see Brock Millman, Managing Dissent in First World War Britain, Frank Cass, 2000, pp. 213 – 215.

[5] In April 1917 a significant chunk of the SPD split off to form the Independent Social Democratic Party (USPD), becoming ‘the only legal party to demand an early peace and to reject all annexations’ (F.L. Carsten, War Against War: British and German Radical Movements in the First World War, Batsford, 1982, p. 152). With ‘approximately 100,000 members … compared with with about 240,000 for the Majority’ this was ‘no inconsequential splinter’, notes Murray Bookchin (Murray Bookchin, The Third Revolution: Popular Movements in the Revolutionary Era. Vol. 3, Continuum International, 2005, p. 8). ‘By the Autumn of 1917, the ranks of those urging moderation in war aims and, if possible, a negotiated peace, now included a most significant number of influential figures from outside the pacifist organisations … Even the former annexationist, shipping tycoon, and friend of the Kaiser, Albert Ballin, appeared eager to explore any possibility of a compromise peace’ (Newton, op. cit., p. 24).

[6] David Stevenson, 1914 – 1918: The History of the First World War, Penguin, 2005, p. 327. Aided by Field Marshal Douglas Haig and the Chief of the Imperial General Staff, William Robertson, the French High Command had ‘succeeded in concealing the extent of the unrest in the French army’ from Lloyd George’s War Policy Committee (David French, The Strategy of the Lloyd George Coalition, 1916-1918, Oxford University Press, 1995, p. 121). Nonetheless, the latter concluded that the crisis in the French army ‘was a reflection of a more serious crisis in French political life’, and it was the need to ‘sustain French national morale’ – for fear ‘that France might go the same way as Russia’ – rather than any faith in Haig’s plans, that ‘finally persuaded ministers that they had to support an offensive in Flanders’ (ibid., pp. 117, 121 – 122). Over 400,000 soldiers (British and German) were killed or wounded in the resulting carnage (Stevenson, op. cit., p. 327).

[8] Newton, op. cit., p. 34. Newton quotes from a 10 July 1917 memorandum from Robert Cecil (then the Under-Secretary of State for Foreign Affairs) advising Foreign Secretary Arthur Balfour that ‘we should aim at peace in the Autumn’ (ibid.). Note that Cecil was not a member of Lloyd George’s War Cabinet, as Newton suggests (the War Cabinet was a small subset of the entire Cabinet).

[9] Newton, op. cit., p. 20 – 21; Richard Striner, Woodrow Wilson and World War 1: A Burden Too Great to Bear, Rowman & Littlefield, 2014, p. 110. There were ‘many indications from British Consulates abroad that the Germans were willing to give up Belgium, but could not do so in advance of a conference, because they regarded it as the crucial bargaining chip in achieving post-war commercial access’ (Newton, op. cit., p. 22, n.18). In public the British Government ‘publicly repell[ed] all suggestion of negotation’ citing Germany’s refusal to ‘announce in advance the restoration of Belgium’. In private the British Foreign Secretary described this refusal as ‘the best thing that could happen to us’.

[10] Newton, op. cit., p. 30. In 1914 Lansdowne had been part of of a Tory cabal scheming with Churchill and others to bring pressure to bear on the British Government to side with France in the days leading up to Britain’s declaration of war (Douglas Newton, Darkest Days: The Truth Behind Britain’s Rush to War, 1914, Verso, 2014, pp. 158, 192, 204 – 205). By November 1917 he had had doubts about the war’s indefinite continuation for some time. A year earlier, as Minister without Portfolio in Asquith’s coalition government, he had written a private memo for the Cabinet, in which he had claimed that the responsibility of those who ‘needlessly prolong’ a war that results in massive slaughter without victory, ‘is not less than that of those who needlessly provoke it’ (Lloyd George, War Memoirs of Lloyd George, Odhams Press, 1938 [?], p. 517). He finally went public about his qualms in a letter to the Daily Telegraph (the Times had refused to publish it) – in which he advocated the coordination and revision of Allied war aims on the basis that this might bring a negotiated peace nearer – for which he was ferociously denounced in the right-wing press (Douglas Newton, ‘The Lansdowne ‘Peace Letter’ of 1917 and the Prospect of Peace by Negotiation with Germany’, Australian Journal of Politics and History, vol. 48, no. 1, 2002, p. 16). In 1918 members of the Women’s Peace Crusade collected over 30,000 signatures for a petition to Lansdowne, calling upon him ‘to make a further public pronouncement, and place [himself] at the head of a movement which, we believe, has the support of a large section of the people of all classes’ (Labour Leader, 6 June 1918, 12 September 1918). An earlier petition calling for a negotiated peace, organised by the Peace Negotiations Committee, an alliance of feminist, labour, religious and pacifist organisations, had received over 220,000 signatures and resulted in the arrest of two former Suffragettes, Ethel Tollemache and Mrs Brimley. The two women were arrested whilst canvassing for signatures, held for six hours and ‘warned that they would be arrested for contravening [the Defence of the Realm Act] if they continued’ (Ann Wiltsher, Most Dangerous Women: Feminist Peace Campaigners of the Great War, Pandora, 1985, p. 138).

[11] Newton, op. cit., pp. 33, 37. One of these German moderates, Prince Max of Baden, would become Chancellor in October 1918. Newton quotes from a letter to Lansdowne, dated 17 May 1918 and ‘probably from Kurt Hahn’ (Prince Max’s contact man in the German Foreign Ministry), in which the author claims that that ‘There is no doubt that Graf Hertling [Georg Hertling – Germany’s Chancellor at the end of 1917 / beginning of 1918] was ready for a just peace in February and March [1918] and that he was strong enough to carry it – if there had been a response from the other side.’ (ibid., p. 38 – 39).