‘What the hell have we got to do with the war?’

Evidence of opposition to the war in the West Indies can be traced in the various countries’ newspapers (which were invariably hostile to such activity).

In British Honduras calls for men to enlist resulted in an unprecedented exodus of young men from the district of San Estevan in early 1916. Some fled across the border to Mexico, while others, who had heard that the governor was coming to their area on a recruiting disappeared into the bush claiming that they had important business to attend to. [1] As late as March 1916, not a single person from the large villages of San Roman, San Antonio or San Estevan had enlisted for active service. [2]

Evasion was not the only method of resistance employed however: For example, the editor of the [British Honduras] Clarion had the ‘King’s Appeal’ for men torn down from his office door and replaced with the note: ‘What the hell have we got to do with the war?’ [3]

In Trinidad pacifist material was widely circulated, and recruiters accused women of disrupting their efforts by encouraging their menfolk not to volunteer. [4] Some of these women appropriated Canadian lyricist Alfred Bryan’s song ‘I didn’t raise my boy to be a soldier’ for use in their protests.

By the beginning of 1917 there was widespread resistance to recruitment in Grenada, while in Jamaica a well-attended anti-conscription rally was held in Kingston on 2 April 1917. [5] 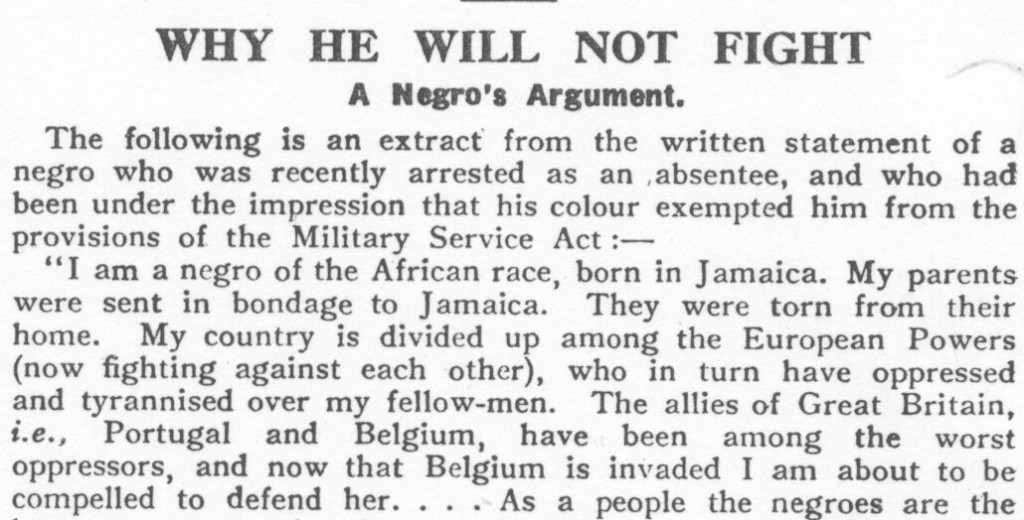 Isaac Hall’s statement, as reported in the NCF’s Tribunal

Ironically, the only named West Indian resister that we know about was detained and imprisoned in England. [6] Six feet 6½ inches tall and a skilled carpenter, Isaac Hall was the grandchild of a slave on a Jamaican sugar plantation. He had arrived in Britain shortly before the start of the war.

Though conscription was not adopted in Jamaica until 1917, Hall was ordered to report for military service when it was adopted in Britain in 1916. When he failed to show up, he was arrested and taken to a training camp. Refusing to obey orders, he was dragged around the parade ground until he became unconscious. Court-martialled and sentenced to two years hard labour in Pentonville, he was repeatedly placed in solitary confinment on a bread and water diet for refusing to work on soldiers’ haversacks.

Hall explained his reasons for refusal as follows:

“I am a negro of the African race, born in Jamaica … My country is divided up among the European Powers (now fighting against each other) who in turn have oppressed and tyrannised over my fellow-men. The allies of Great Britain, ie. Portugal and Belgium, have been among the worst oppressors, and now that Belgium is invaded I am about to be compelled to defend her … In view of these circumstances, and also the fact that I have a moral objection to all wars, I would sacrifice my rights rather than fight …’ [7]

This article first appeared in the December 2014 / January 2015 issue of Peace News.

[4] Ibid., p. 73 – 74. ‘The adoption of this song by the women and more specifically, their projection of themselves as guardians of life and peace-makers, were significant.’ Even from the scanty – and almost wholly hostile – record, it is known that on at least one occasion a potential recruit in Trinidad changed his mind after reading pacifist material.

[5] Howe, op. cit., p.74, 89. The rally did not prevent introduction of conscription, which came into force in Jamaica two days later on 4 April 1917. Conscription was also brought in in Grenada and British Honduras (ibid., p.90).

[6] Unless otherwise stated, the following account is based on the material in Fenner Brockway, Bermondsey Story, Allen and Unwin, 1949, p. 67 – 68. According to Brockway’s account, a Quaker visitor at the prison alerted the No Conscription Fellowship (NCF) to Hall’s case, and he was then visited by the doctor and Labour party activist Alfred Salter, who found Hall ‘a living skeleton … gaunt, bent, starved … a coal-black man with ashen lips and sunken eyes’. Within 48 hours (according to Brockway) Salter had secured Hall’s release, collecting him from Pentonville in a taxi and sheltering him for nine months in his [ie. Salter’s] own house until he could return to the West Indies. This chronology is, however, problematic, as it would appear that the NCF were well aware of Hall’s case in October 1916 (see note 7. below), whereas we know from Hansard that Hall was not released before early 1918 http://hansard.millbanksystems.com/commons/1918/jan/17/conscientious-objectors.

[7] ‘Why he will not fight: A Negro’s Argument’, Tribunal, 19 October 1916. In line with contemporary racism, Hall is merely referred to as ‘a negro’. The Tribunal‘s account appears to conflict with Brockway’s description of Hall as ‘a simple-minded Christian’ who ‘knew nothing of the issues of the war. He knew only the commandment “Thou shalt not kill.”.’