Given his canonisation by mainstream culture as the icon of peace and nonviolence, one might have imagined that Gandhi would have led a strong campaign of resistance to the war. Unfortunately, nothing could be further from the case. 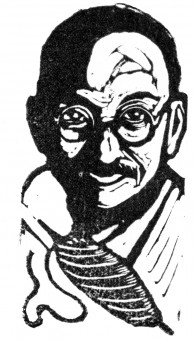 While it is well known that Gandhi played a role in raising an Indian ambulance corps to serve in the war at its outset [1], it is perhaps less widely known that he also later recruited Indians to fight in the War.

In April 1918, following a conference in Delhi convened by the viceroy, Lord Chelmsford, ‘to get support from prominent men for the government’s plan to raise 500,000 more Indian troops’, Gandhi ‘gave his unconditional assent’ to British plans. [2]

In line with the ‘death cult’ that he preached [3], Gandhi was ‘prepared … to contemplate the death of a large of Indians for the sake of the spiritual regeneration and political emancipation of the nation’. [4] Attempting to recruit 12,000 men from the Kheda district of Gujarat, Gandhi did not shy away from employing moral blackmail, telling them that if they were not prepared ‘to make even this sacrifice for the Empire, for the sake of swaraj, no wonder that we should be regarded unworthy of it’. [5]

Fortunately, he was spectacularly unsuccessful: ‘[a]t the end of a month he had less than a hundred volunteers’, though he eventually scraped together a few dozen more. [6]

An edited version of this article first appeared in the December 2014 / January 2015 issue of Peace News.

[3] ‘It might fairly be said that Gandhi fostered a death cult … His cavalier indifference to life and morbid embrace of death are the most unappealing and incoherent facets of his doctrine.’ (Norman G. Finkelstein, What Gandhi says about nonviolence, resistance and courage, OR Books, 2012, p.40). A typical example is Gandhi’s claim that ‘That nation is great which rests its head upon death as its pillow.’